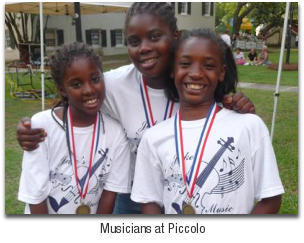 A popular spring concert/fundraiser featured students in the Jake's Music program directed by James Cunningham and was attended by families and friends along with Mayor Adrian Fenty and D.C. Council Chairman and incoming Mayor Vincent Gray.

Dynamic drumming from the Jake’s Music Drum Corps filled the streets of downtown Charleston as spectators viewed the Moja parade.

At their 2012 annual meeting the Carolinas Council of Housing, Redevelopment and Codes Officials presented to three housing authorities from North and South Carolina, awards for their development of programs that had helped to fill the gap between housing and human/social services for the clientele each of them serve. The array of potential topics was broad, examples of which being programs for the elderly, homeownership programs, and programs for adolescents and young adults. One of the three awards went to Jake’s Music. For more details see http://chacity.org/press-release-details.cfm?PressID=29

Metanoia celebrated its Jubilee with an impressive and colorful musical concert written and directed by Fred Hudson, our Director of Music.

Excellent Southern fare, open bar and a great music line up, including singer songwriter Caroline McLeod, Wando High Duet Silent Mansion, Americana singer guitarist Jimi Beauston, Jay White and his merry Creekside Band, and the peel painting rock and roll from The Average Savage! This was a successful fundraiser in the spring of 2013 at the Shem Creekside home of Henry and Kathleen Savage.

Calendars for the 2013 year were designed, produced and sold to benefit Jake's Music. Production expenses were generously covered by Myra Vassian, teacher at The Juilliard School, and the featured local birds were beautifully photographed by Curt Salisbury, award winning photographer, who spearheaded the idea. For more go to http://deweesislandblog.com/2012/11/24/curt-salisbury-publishes-calendar-for-jake-mcguire-savage-foundation/