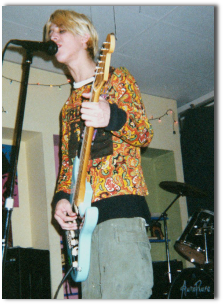 "Music reminds you that you have a soul."

Jake was born in 1978 in Washington, DC. He battled cystic fibrosis from his birth until his death in 1999. Though disease ended his life, it by no means defined it. He taught himself to play the guitar at the age of 15, and found his true calling and inspiration in music.

Jake died at the age of 21, but not without contributing profoundly to the lives of those around him. He founded a band called Aura Phase and performed in D.C., Baltimore, and Boston. A career in music was his dream.

We hope through "Jake's Music" to make that dream attainable for other young people.

Click here to listen to songs from Jake's two albums Sanity Is For Suckers and Midnight Madness or his final boombox recording 4 Songs 4 Mom.